Today, I’m here for my third post in my Victober series, which is a weekly feature during the month of October that’s all about sharing my love for Victorian literature.  I wasn’t quite sure about what I wanted to write about this week, until last night, when I finished my third read for Victober. I realized how often we discuss our favourite books, but discussing our favourite characters is equally as important and I really wanted to do so, especially to introduce you Victorian heroines that made a lasting impression on me, because they were so ahead of their times. There is only one male character that makes the list, actually, because most Victorian male characters are dreadful, but anyway. Without further ado, let’s discuss my favourite Victorian characters, and I hope that sharing my love for them will make you want to read the novels they’re in!


♡ Bathsheba Everdene, from Far from the Madding Crowd by Thomas Hardy

Far from the Madding Crowd is one of my top 3 favourite novels ever, so of course I have to talk about it! Its main character, Bathsheba Everdene, is at the head of a farm, defying expectations from Victorian society, because she is a woman. I admire her, because she’s ambitious, independent, headstrong, determined, and free-spirited. She makes it clear, time and time again, that she doesn’t want to become a man’s property and that she will manage her farm by herself. How can you not love her, when it’s 1874 and Thomas Hardy makes her say things such as:

“Well what I mean is that I shouldn’t mind being a bride at a wedding, if I could be one without having a husband. But since a woman can’t show off in that way by herself, I shan’t marry-at least yet.”

It’s true that she makes mistakes, and sometimes acts in a very stupid way. But she is a feminist heroine, even though she’s often forgotten. She knows she will have to work twice as hard as any man, to earn respect from her employees, and she does it. She is ahead of her time and isn’t scared to defy expectations, which she does amazingly. Many people are mad at her for some of her romantic entanglements, but she does her best in a society dominated by men and she stays true to herself. I adore her so much.

♡ Helen Graham, from The Tenant of Wildfell Hall by Anne Brontë

Anne Brontë is my favourite Brontë sister because of this novel and because of Helen, who is such a strong heroine. She is a fierce, loyal, caring and brave character, who puts her safety and her son’s first, even if it means being criticized by all. She aims to be financially independent and not to depend on men (in any case, she’ll fight it as hard as she can). Most of all and that’s a very famous scene in the book… she slams the door on her husband’s face, protecting herself and not giving in to his abusive behaviour. She argues with him, she resists him, even though this wasn’t discussed as a possibility at the time. I didn’t know what to expect when I read The Tenant of Wildfell Hall, so reading about Helen couldn’t help but amaze me, for she’s one of the strongest 19th century heroines I’ve ever read about.

♡ Gabriel Oak, from Far from the Madding Crowd by Thomas Hardy

Yes, I know, another character from Far from the Madding Crowd, but it shouldn’t come as a surprise to anyone. Gabriel Oak is the only male character in Victorian literature that ever makes it to my favourite characters post, because he’s such a kind, caring and selfless man and unlike every single Victorian male character, I don’t have anything to be mad at him about. I love Gabriel Oak, because he can take no for an answer, he isn’t frustrated that a woman is above him in a hierarchy, he will always try to help people, even if it hurts his feelings and he is nothing, but kindness.

I read Lady Audley’s Secret during Victober last year and adored it, especially Lady Audley herself, who was one of the most interesting characters I’ve ever come across in literature. She is a brilliant and ambitious woman, who defied all social conventions, had questionable morals and the reader has doubts about her for the whole novel. I am completely in awe of her character, because while she doesn’t always make the right choices, she did everything to get what she wanted in life and I can’t entirely blame her for that. Besides, I love morally ambiguous characters and she’s a perfect anti-heroine! 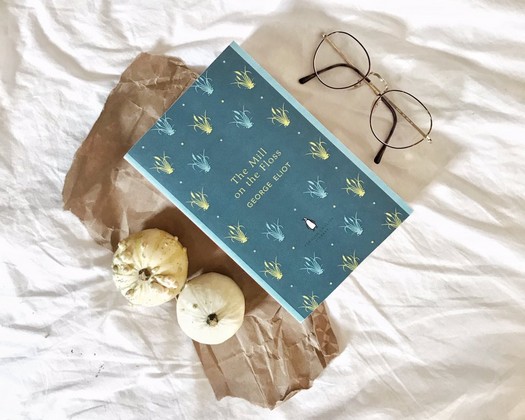 ♡ Maggie Tulliver, from The Mill on the Floss by George Eliot

Last but not least, Maggie Tulliver actually gave me the idea for today’s post and it’s also all thanks to this amazing article on Literary Hub, defending Maggie, as she’s often considered to be George Eliot’s most underrated heroine. Maggie makes so many mistakes in her life, that’s true, but many of them are due to the men around her, as well as society in general. She is the type of heroine who is too much for her time, she is considered too clever, too passionate, too impetuous and commits a grave crime in Victorian society : she occupies space that has been denied to her. I knew I’d get along splendidly with her from the moment she was reading books people would advise her not to read! I have issues with The Mill on the Floss, that’s true, but Maggie was such a great character.

That’s it for me today! I hope that you had a wonderful week and that everyone participating in Victober is having a great time.

Thanks for reading,
Lots of love,
Lucie
Advertisement