Hello, beautiful people!
When I saw that I could request Bellewether by Susanna Kearsley on Netgalley, I didn’t hesitate one second, as it was one of my most anticipated releases of the year, considering how much I adore her other works. Of course, I was over the moon to get approved and to discover another era, another mystery and another love story. Bellewetherwas released this Tuesday, so today, I thought I would share my review of it with you! 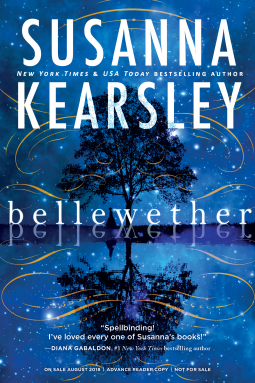 Genres: historical fiction, romance
Number of pages: 512
Summary: “The house, when I first saw it, seemed intent on guarding what it knew; but we all learned, by the end of it, that secrets aren’t such easy things to keep.”


It’s late summer, war is raging, and families are torn apart by divided loyalties and deadly secrets. In this complex and dangerous time, a young French Canadian lieutenant is captured and billeted with a Long Island family, an unwilling and unwelcome guest. As he begins to pitch in with the never-ending household tasks and farm chores, Jean-Philippe de Sabran finds himself drawn to the daughter of the house. Slowly, Lydia Wilde comes to lean on Jean-Philippe, true soldier and gentleman, until their lives become inextricably intertwined. Legend has it that the forbidden love between Jean-Philippe and Lydia ended tragically, but centuries later, the clues they left behind slowly unveil the true story.
Part history, part romance, and all kinds of magic, Susanna Kearsley’s latest masterpiece will draw you in and never let you go, even long after you’ve closed the last page.
MY THOUGHTS
Disclaimer : I received this book through Netgalley in exchange for an honest review. All opinions are my own. The quotes I used might have changed in the final copy.

“You’ll find most people, when you get to know them, are not what you were afraid they’d be. They’re only people.”

Susanna Kearsley’s novels are in part known for their dual historical perspectives: they usually follow a character in our own time, trying to understand what happened to historical figures, with a touch of supernatural. This time around, our protagonist was Charley, who had just been appointed as a curator to the Wilde House Museum and discovered the legend of Lydia and her French soldier, which made her curious to understand what really happened, to potentially include it into the museography of the museum.
I truly enjoyed reading about Charley, especially because I knew how accurately Kearsley described what it meant to be a curator, talked about their daily duties and the opposition they could encounter by an administration board or local historical societies. Susanna Kearsley actually used to be a museum curator – so she’s trained in history and that’s why she’s amazing with historical details! – and I felt like it showed, so it made me really happy, considering all the knowledge I have of that world. Charley’s narrative also was quite interesting, because it was about reconnecting with your family, as well as grief, which was splendidly done. Bellewether also had references to some of Kearsley’s previous novels, I didn’t catch those she mentioned in her author’s note, but she mentioned Sebastian from The Firebird, I wasn’t quite sure until I double checked, but it made me so proud to recognise that as a fan of her works!

Moreover, while all of Kearsley’s novels (that I have read, at least?) are set in Europe, this one was set in America and I was so curious, because I don’t know that much about the Seven Years War from an American perspective. Once again, Kearsley astonished me with the accuracy of her research, how she wrote about some historical figures, how I time-traveled and was walking alongside Lydia and Jean-Philippe. As I’m French, I also was fascinated to learn about French people in America at that time, whether it was the Acadians or the Canadians, for we don’t learn about them that much at school. Bellewether also was, in part, about slavery; the author wrote about people who owned slaves and people who were against it, about running away and staying, about how we, in our modern societies, could hide from that past.

“Lara told her, “That’s true. You know, back when I went to school we never learned about us having slaves in the north. It was all just the Underground Railroad and Lincoln, and how we were good and the south was so bad, and then I read this article on slavery in Brroklyn and it said at one time New York had more slaves than any city except Charleston. And it blew my mind. I mean,” she said, “it shouldn’t have. I should have known of course we had slaves, too. The history wa
s all right there, if I’d just looked for it.” “You liked the ‘nice’ story better.” Malaika was matter-of-fact. “Most folks do. It makes them feel good.” (p. 125)

Bellewether confronted racism several times, when it talked about slavery, of course, but also about Native Americans. In the 18thcentury narrative, it approached the topic with a dual perspective from two soldiers, one talking about how they were ‘savages’ (that character was truly awfull), the second one trying to show him how wrong he was and how those societies that called themselves ‘civilised’ could be prejudiced and in the wrong. It also approached that topic in the contemporary narrative, as an important character was Native American. It also talked about respectful terminology, I don’t know how accurate it was and it felt a bit forced at first, but then it got better.
The plot of this novel was really enjoyable, even though I had to confess that I struggled a bit to get into it and thought the second half was so much better than the first one. The first half of the novel was about setting the mystery and the characters, whereas the second half was about getting all the answers and it became gripping. I adored the atmosphere created around the Wilde House, with the supernatural element (a ghost this time), it was almost a bit scary considering the legend, which was so much fun in a way. I also have the feeling that the ending was a little bit abrupt: I did have the closure I wanted, but it all happened so fast, like the author realised that she had to finish her book. I truly hope this was resolved in the final copy, because it was a tad frustrating.

“She’d fought those feelings all the could, while standing in that doorway. She had told heself the trembling was from fear, and nothing else. But it had been an unconvincing explanation, and her heart had not believed it.Hearts were stubborn things, and often inconvenient.” (p. 280)

Now, about the romance. There is always a point in Susanna Kearsley’s novels when the romance takes a big step on the plot and unfortunately, they usually are my least favourite part of the novel, because there are one in the contemporary era, one in the historical one, it kind of feels too much. I quite liked the one involving Charley, in the 21th century, even though a certain scene didn’t feel natural. However, I wasn’t that convinced about Lydia and Jean-Philippe. I agree that they liked each other, I do. I agree that Kearsley can write romance scenes that make me smile, I do. But how am I supposed to believe that two characters are in love and want to spend the rest of their lives togetherwhen they didn’t really speak the same language and had known each other only for a few months? I can understand attraction in this situation, but I thought that the love bit was a little too much. I know I’m not big on romance most of the time, but still.
Overall, Bellewether was a good historical novel, although it wasn’t my favourite of Kearsley’s works. While I adored the mystery, the setting and Charley’s storyline, I had a suspension of disbelief problem with the romance between Lydia and Jean-Philippe. Still, if you’re interested to read a historical novel set during the Seven Years War in America, you should give it a go! Otherwise, you should still try some of Susanna Kearsley’s other works, such as The Winter Sea(my personal favourite), The Shadowy Horsesor The Firebird(also that’s the chronological order if you want to get all the references).

Thank you for reading,
Lots of love,
Lucie